For awhile I had felt that in order to properly protect my acrylic brushes, (many of which are of rather high quality), I needed a better way to air dry them following cleaning. I had noticed that in at least one instance, when I had cleaned a student-grade round, and left it to dry point-up, the water worked its way either through or over the ferrule, and got into the wooden handle, causing the lacquer to "pop" and peel off.  Perhaps this would never happen to a good quality brush, but why take the chance?  Thereafter I made it a practice to lay my brushes to dry horizontally on a coated-wire rack. This, however, didn't solve all problems. Despite my best efforts to wash and rinse them thoroughly, (with "The Masters" brush cleaner--pretty good stuff, by the way), some of the tufts would become quite stiff when they dried.

I also remembered reading about the problem of pigment accumulating near the ferrule, an area impossible to reach by mechanical means, i.e., working lather into the hair. I was concerned about this accumulation eventually causing the brush to loose its shape and flexibility. The ideal solution seemed to be to clench them in some sort of apparatus that would suspend them, head down, without the bristles being pressed against anything, and so that plenty of air could circulate around them.  I read once about fixing clothespins to a bracket for brush drying/storage. I don't remember exactly how this person did it, but I decided to adapt the idea to my own needs.

I happened to have a number of these little wire-clips, (see picture), made of something similar to silicone rubber, and designed to hold Christmas light wires. I found that after removing the foam tape from the back, these little guys were just the ticket to holding onto most of the paintbrush sizes I use. ( I don't know if anybody still makes them; we got them from a local store as part of a Christmas light kit that had a variety of do-dads in a miniature "tackle box".) Anyway, all I needed to do was construct a bracket, attach a few of these clips by one end, (leaving the other end free to be flexed), and add a  few clothespins for the larger brush sizes.

Having a rather crowded desk, I decided to save space by going with a "tomato cage" format, (see completed project; last photo). I started with an old screw-on plastic lid that came off a can of bungees. This would be my base. I then cut a length of 14 ga. 1"x 2" mesh welded-wire fence with a small pair of  bolt cutters, about 12" wide, and more than three times the length of the diameter of the lid. I spray-painted it, and left it to dry. I then selectively snipped sections from both sides of the piece, until I had short "spikes" on one end, long spikes on the other; (See diagram).

Wearing gloves, (of course!) I carefully bent the piece in several places to roll it into a cage whose base would fit snugly into the aforementioned plastic lid; the base of the cage being the end with the shorter spikes. There was an overlapping of ends when  I formed the cage; I fastened these together in several places with cable ties. I drilled a couple of holes in the side of the lid that were big enough to accommodate the width of 4" cable ties. After inserting the cage into the lid, I ran two cable ties through the holes and around the lowest rung of the cage to secure the two parts together. I really didn't want the paintbrushes rubbing up against the side of the cage, so I offset the wire spikes at the top inward a bit, somewhat like the shape of a reverse turn symbol on a road sign. Mounting the clips wasn't a big problem; I simply poked a hole in one end of each one and immediately pressed it onto one of the spikes, (before the hole I made closed over, like a "self-healing" mat). I made sure all the clips were facing the same way for ease of use. 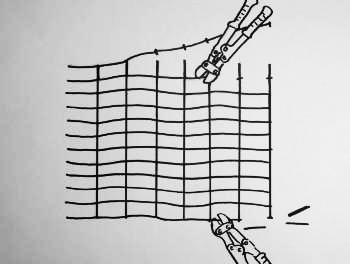 I still needed a few clothespins to take advantage of the space in the center of the cage, and hold the thicker, heavier brushes. 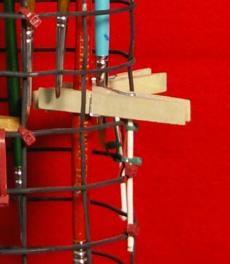 The obvious way was to do this was to poke some sort of relatively tight-fitting rod into the center of the spring of the clothespin, and then mount that rod to the cage with the jaws of the clothespin sticking into the cage, the handles sticking out. Only I had more trouble than I bargained for finding a rod that would be a tight fit for the spring-hole. I finally settled on a q-tip stem.  Having removed the cotton I just peeled back paper, with some difficulty, until I had the proper diameter; (these are pretty small clothespins, as you may have gathered). I then cable-tied 4 such assemblies to the side of the cage, trying to avoid them getting in the way of brushes that would be stored in the clips above, and setting them at various heights so they wouldn't run into each other. I may eventually change out the q-tip stems for something sturdier, like a bamboo skewer.

Speaking of which, I hope to demonstrate how bamboo, or other types of doweling may be used to make a simpler clothespin rack in a later post.