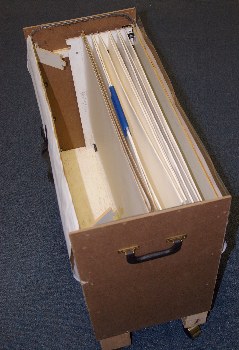 For storage of large artworks on paper and sheet stock, nothing, in my opinion beats vertical storage; specifically, giant hanging folders. I have never been able, however, to find a system commercially available  that suited my needs. At a minimum, the features I wanted were:

As I said, I couldn't seem to find anything ideal on the market, so I decided to make one. After all, if I built it myself, I could add all of  the features I wanted, plus make it fit nicely under my desk. As with most projects, this one proved to take more time, and present more complications than anticipated, and I'm not likely to attempt anything similar anytime soon, but I am nevertheless pretty pleased with the results. One thing that helped was that I started by drawing up a fairly comprehensive plan with exact (?) dimensions.

O.K., so it went through several revisions along the way, but at least the blueprint gave me a starting point. I haven't posted the plan here; the pencil lines probably wouldn't show up well, and It wouldn't necessarily clarify anything. Rather I've decided to cover the assembly stage in this post, beginning at the point when I had just about all the parts cut out, shaped and ready to go.

The board in this picture is the right-side panel. The first step was to screw 4 corner-braces apiece to the front and rear ends. 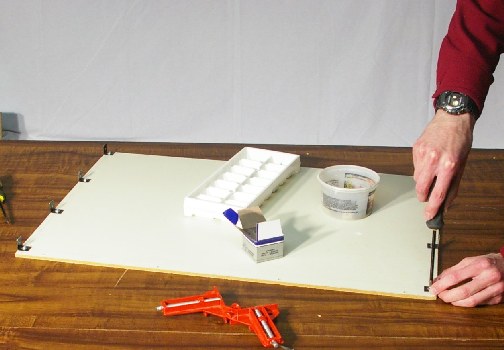 Then I held the side-panel to the base, at right angles, with a right-angle clamp. (A very handy device, but as it happened I found I had to temporarily remove the "L" brace from that corner, as it interfered with the clamp.) The base and panel are now standing on end for ease of assembly. 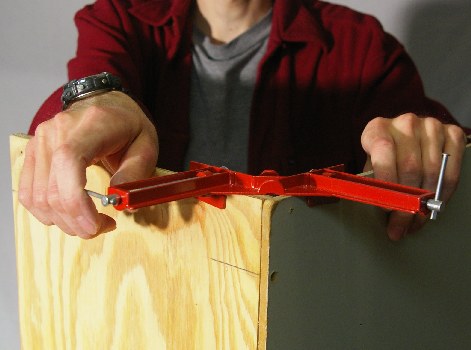 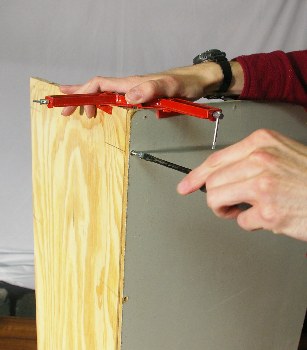 I fastened the two together with four wood screws. As you may have gathered, I had already drilled most of the holes when I started this assembly process. I had to drill for, and insert, wall anchors in the edges of the plywood base, as the edges of this material don't hold fasteners very well. 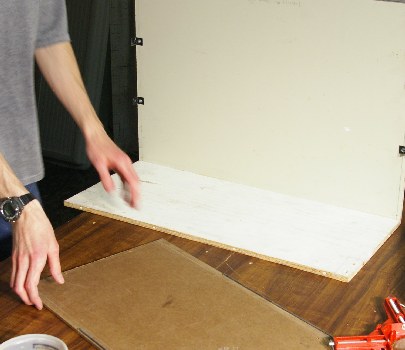 Here, (above), I am preparing to add the back panel. 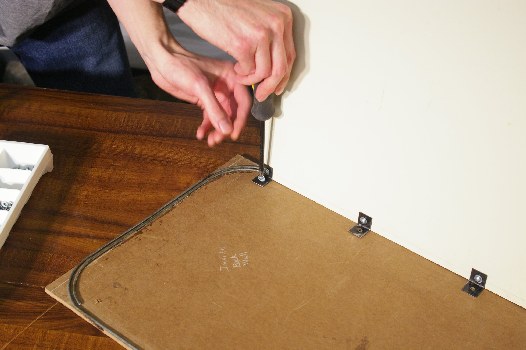 Screwing the Back panel to the "L" braces of the right-side panel. See the door-track? It's that metal "bracket"  at the top of the panel. It took forever to put together. It's actually two pieces of galvanized wire, each having been bent at each end to a predetermined curve, then fastened to the top part of the panel, with about 1/8" spacing between them. The original plan, (which I followed with partial success), was to secure the track(s) by soldering "cleats", which were short little stubs of wire, to the back of each track-wire, then drill matching holes for them in the panel(s).This worked better than I had any right to expect, but there were still at least a couple of difficulties.

First, galvanized wire doesn't really "take" solder, flux or no flux. This meant I had to file flats on both the track and the ends of the cleat wires. This was just as well, however; the closer the surfaces fit, the better the joint.

The other problem was, as might be expected, I couldn't get all the cleats to line up just right with the holes, resulting in some of them breaking off during assembly. I had to do a number of things to  correct this problem, but basically, wherever I had a missing cleat, I substituted a dot of glue. One of the reasons I didn't use glue for the whole track in the first place was that I felt the "squeeze-out" might cause problems for the door later on. As it happened, I was able to scrape out most of the excess from between the track wires, so that turned out O.K. 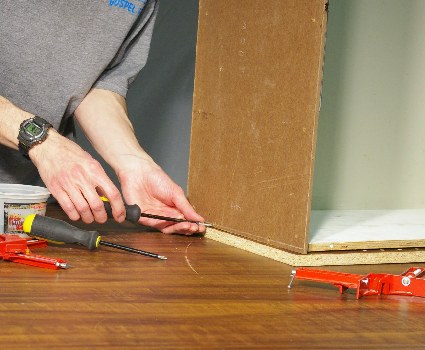 Now I screw the bottom of the panel to the base. The board underneath isn't part of the assembly; it's just there to give me enough "knuckle clearance" to turn the screwdriver. 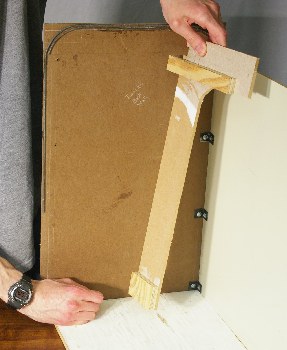 The piece I am about to add her is the rear folder-support. I have already added the spacer-blocks to it and drilled the mounting holes so it's ready to go. 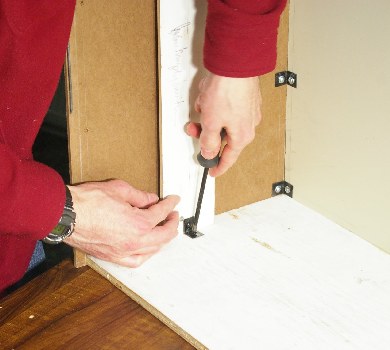 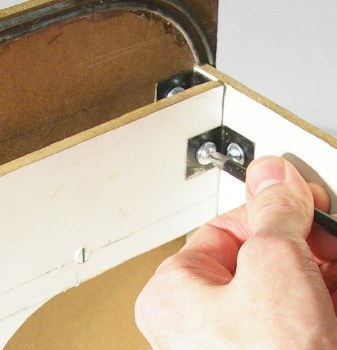 One at the top. 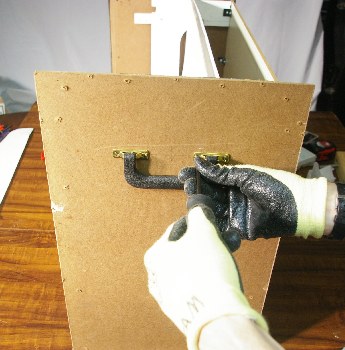 Now I'm adding the handle to the front panel. I didn't bother showing the assembly of the front panel/folder-support, as they are pretty much a mirror of the rear ones. Both folder supports have spacer-blocks, but the one behind this panel, (the top block), is providing a solid place for the handle screws to be anchored. In my next post I will cover the rest of the assembly, (including the installation of the doors), and show an enlarged version of the "Finished product" photo I posted at the top.