The construction of most of the giant art-storage folders I made for my art-cart was quite simple. Each is basically two pieces of posterboard glued together at the base, with a couple of lengths of wire along the top to support the ends in the filebox. These work fine for storing large pictures and stock, but don't work so well for the smaller sizes like 8" x 10"s and 9" x 12"s. Those sizes would simply "clump" at the bottom of one of these folders, each of which is about 18" x 26", taking up thickness without using all of the lateral storage area. I decided to make a special eight -pocket folder for these smaller sizes, that would make use of almost all of the available area in a regular (18 x 26) folder.

I made two leaves for the folder, each according to the plan above (which depicts one half). I made only one major change in it along the way, which was to trim off the  1/2" margin at the bottom of each half. As I will explain later, this was originally supposed to form the bottom of the folder, but I wound up using something more flexible.

I started off by marking out the smaller pockets from some posterboard scraps. I marked off the first one... 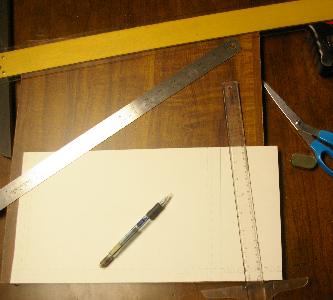 ...then traced it and transferred the marks on the edges to three more. I used dashed lines to signify folds, and solid lines for where I would cut. 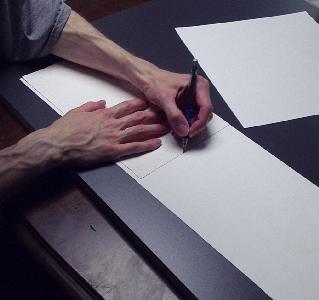 Then, I marked off the four large pockets. Because I planned to cut all four out of the same sheet of stock, I was able to use an old drafting technique, called "projecting the lines" to speed up the process. I lined up the left and bottom edges of the posterboard flush with my workboard, and taped it down. I made marks along these edges defining the lengths of two pockets along the lower edge, and the  heights of two pockets along the left edge (making sure to include the tabs and flaps that would give the pockets their final form). I then "projected," or extended, these marks across the length and breadth of the board with a "T" square and a ruler. 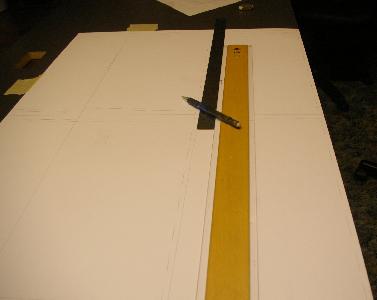 Here are all 8 of the pockets after being cut out. They still need to be trimmed and folded into shape. The larger pockets (on the right) will be 8" x 10 1/4", and accommodate items up to 9 1/2" x 12". The two little red squares on each one are places I marked to define small tabs which would help form the pockets. I have colored them with a red pencil to make sure I don't overlook them when I trim the excess; I want to cut around them, but not cut them off. 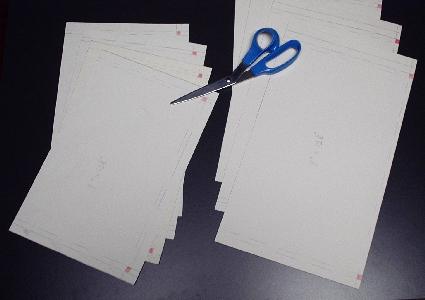 Here, I am marking off one "leaf" of the folder, which will support 4 pockets. Once again, there are fold lines and cut lines, as well as guidelines, which will  enable me to put the pockets in their proper positions. 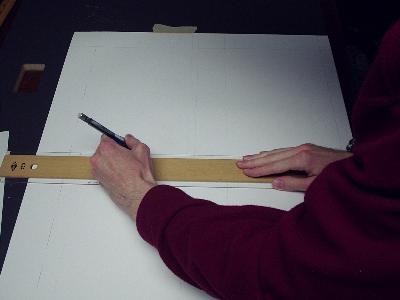 I laid this piece on top of another piece of stock and transferred the marks. 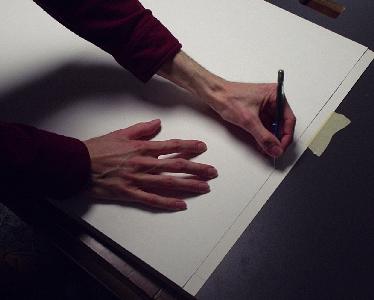 I wanted to make sure that the leaves of the folder mirrored each other, so I laid them out "bookmatch" fashion, in the same orientation they would be when the folder was completed. Having them in this position while drawing the lines helped me to keep from getting confused where everything belonged.

I bent the bottom edges of each of the two leaves like this... 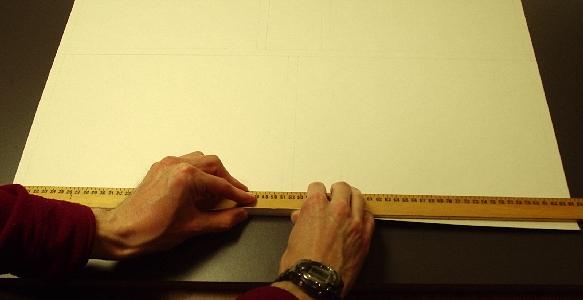 And each of the top edges like this. One stiffening/hanging wire will go in each top edge in the fold. 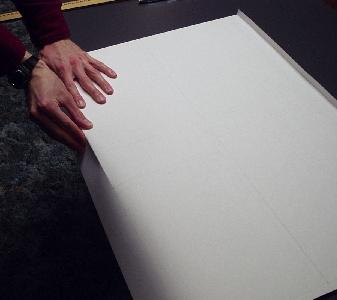 In these next three images, I am forming one of the eight pockets, folding up, then down... 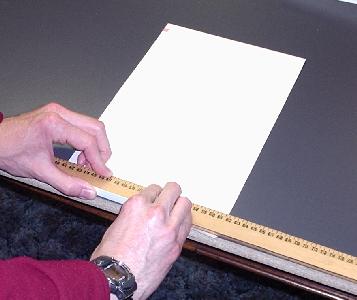 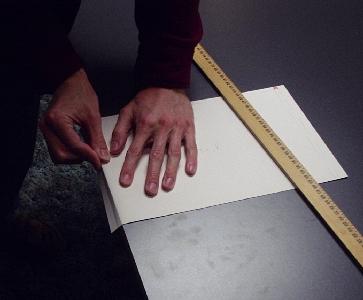 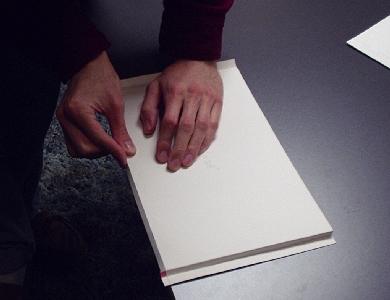 Here now are all the parts, ready for assembly. The eight pockets are on top, which I have folded into what are essentially three-sided boxes, with side-tabs, with which I will secure them to the leaves of the folder. I hope the way they are assembled will become clearer in the first few photos of my next post. (I have divided this post into two parts, because I had so many pictures, a single article might have been too big, and difficult to load!)