In my last post, I described the first stages of the assembly of my "art-cart". I am picking up the story a little ahead of where we left off, having already attached the left-side panel and prepared the doors for mounting.

Here is a close-up of one of the edges of a door. It is nothing more than a sheet of corrugated cardboard cut to size, with lengths of stiff fence-wire, (the same stuff the "tracks" are made of), which are stuck through the channels at intervals, and protrude a bit at each end. I don't know whether you can see these wire-ends or not, (I really should've chosen a better background), but I have pounded each wire-end flat with an anvil, because the spaces in the tracks proved a bit too narrow for the full diameter of the wire. The wire ends are like little teeth, or cams, and they will hold and guide the door in the track like the rollers of a garage door.

Pounding the wire-ends flat left them overlong, and slightly jagged, so I filed them down some, to the proper length, and also to a more rounded shape for smoother action. Finding the "proper length", was a matter of trial and error, as the cart isn't perfectly square- (with all that measuring, too!), but I got it about right eventually by putting the shorter wires nearer the top of the door, where for some reason the cart seemed to be narrower.

Before I explain about the mounting of the doors, let me mention one feature I added to the inside of the cart at about the same time. I hadn't included it in my original drawing, but when I started actually cutting out parts, I figured I'd better work it in too. It's a pair of extensions, or "wings", which, when swung into position, extend the folder-holding capacity of the cart, by effectively lengthening the folder supports. When swung out of position, they  allow the storage of bulky items in that side of the cart, like drawing pads and picture frames. Here, (below), is the front one, shown folded. The small red object, (on the main folder support), is a cable tie, which works as a "stop" for the folders when the extensions are not in place. 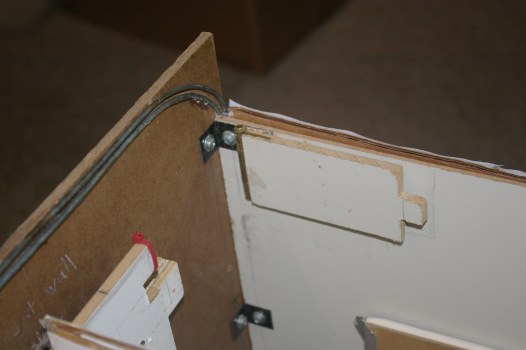 And here is the same one shown swung into position. As you can see, I have removed the cable tie, so that the extension, which pivots on a small door hinge, can be fit into the matching groove on the main folder support- rather like a jigsaw puzzle piece. I rasped each extension to fit fairly snugly, and also beveled the "leading edge" so it could be pressed in without too much difficulty. 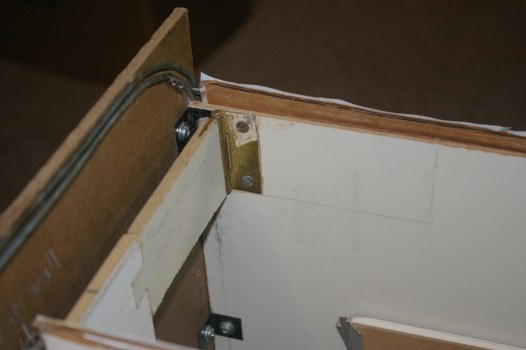 This brings us to another problem I encountered with the doors, as I worked to make them slide smoothly. One among many things I had to do to achieve smooth door action, was to bevel the top edges of the side-panels. What I didn't appreciate at the time, was that in rasping the 1" wide bevel, I was going to run into the hinge-screws for  the extensions. Of course I could, and did, use a metal-file to shorten the screws when I shaped the bevel on that panel, (see below), but I had to be careful. I already had very little screw-thread in the panel to hold the hinges, and I needed to be sure the hinge would still be held securely. At one point when I was working on the bevel, I had one of the hinge/extension assemblies dismounted. After I had rasped the bevel, the material of the panel near the top edge was so thin, I had a tough time getting the screw to "bite". After several attempts to shim/redo the hole, I decided the screw was secure enough, and moved on. 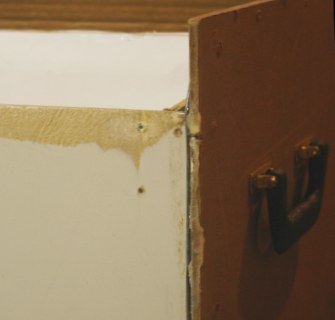 Preparing the doors and tracks to fit together involved rasping, filing and sanding, (of both the "teeth" and the tracks), mounting the doors to try the fit and action, dismounting them when it didn't run smooth enough, more filing, some gap-filling... you get the idea. I also applied candle wax rather generously to the tracks and teeth, which helped a lot. The image below show the cart with the doors in place; the action had smoothed out considerably but I still needed to cover them with plastic to make them water-resistant. 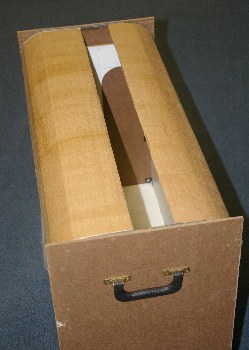 I began this step by  rolling the left door to closed position, (covering the top of the cart about half way). This was important because I needed to find out how much slack I would need in the plastic in order to allow the door to make the curve. I planned on securing it by the leading and back edges only, with no tape in the middle, as this would have probably limited the flexibility of the door, and the vinyl can't really stretch much.

Having already cut the vinyl to approximately the same width as the door, I used 2" wide double-sided tape to secure its top edge to the leading edge of the door. I then cut the vinyl off a bit below the back edge, to allow for a little "lip" of material that would go around the edge of the door. When I had indexed a sufficient length for the vinyl, I took the door off, and taped the back edge down, first on the outside edge of the door, then taping down the excess "lip" on the inside. Any double-sided tape left exposed, I neutralized with talc.

I covered the other door almost exactly the same way, with one difference. When the cart is under my art-table, it sticks out a little at the right side. As I said, I wanted to protect the contents from water possibly getting spilled into the cart, so I planned on giving the right-hand door a stiff, overlapping flap of plastic, which would shed water away from the crack where the doors meet.

What I ended up using for this, was a plastic carpet-protector, used by house painters to shield the carpet from errant brush strokes. There is a slight but permanent bend along the length of this protector, about 1/2" from the edge. It was doubtless manufactured that way to "grab" the edge of the carpet pile, but I used the bend to my advantage in another way. The image below shows the two doors in place, with the carpet shield attached to the right door with hot glue. I glued it in place before adding the vinyl. The clear plastic shield sticks up at a slight angle, due to the bend, enabling it to ride easily over the other door. (The handles are also visible; I explain about them below.) I then trimmed the edges of the vinyl to keep them interfering with the door action in the track area. 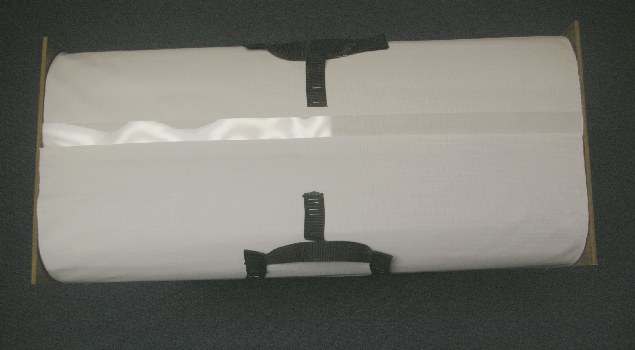 The next step was to make the handles. I had originally thought of using little chunks of hardboard for handles, having them protruding above the door by about a quarter inch or so.

In the end, however, I decided that strap material would work better, because hard handles, when mounted, might also protrude slightly through the back side of the door, and cause unwanted rubbing. Here is a diagram showing an approximation of how the handles are made; quite simple really. I used hot glue for the joints instead of stitching, which is what is normally what is used commercially for joining this kind of strap. I also coated the ends of each strap-section with "Plasti-dip", to keep them from unraveling. 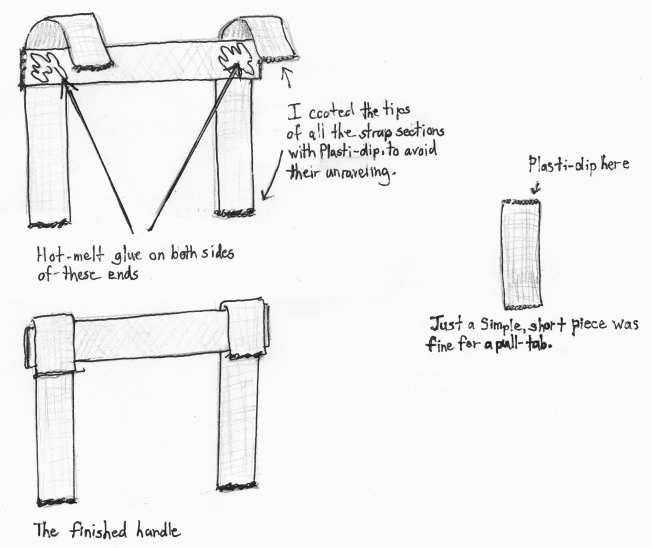 I attached the three-part handles first. These are the ones I will use to pull the doors shut. For the best mechanical advantage, I installed them fairly low on the doors.

The pull tabs are for opening the doors. For best ease of use, attached them nearer to the leading edges of the doors. I used an extra-long-reach stapler to secure them, being careful to avoid hitting any of the internal wires of the door, and using at least two, sometimes four, staples per joint. The doors are rather thick, so the staples didn't fold over nicely on the other side, the way they're supposed to. I had to use a flat-blade screwdriver and a hammer to bend and press down the ends of the staples.

Below, you can see the bottom of the cart after I attached the wheels. there are 3 casters off an old office chair, mounted on blocks of framing lumber, And two miniature rollers I made myself. The reason for this unusual arrangement is that I wanted the back-left corner of the cart to run on one of the pedestals on which my desk is mounted. This allows it to fit partly under the desk like a drawer. ( I had to customize the desk-pedestal with a runway to allow this.) 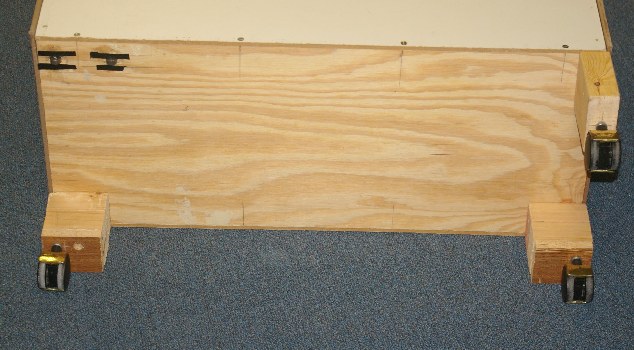 So here is the finished product, with folders inside. I made these myself; (they're only posterboard sheets glued together, with fence-wire for hanging-rods), but this post is too already too long for me to go into that... I may cover it in a later one . 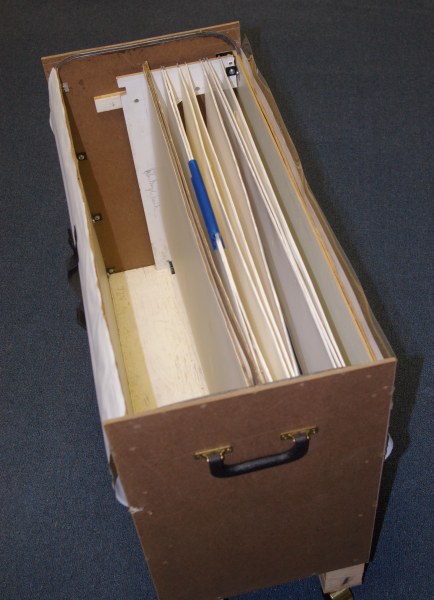