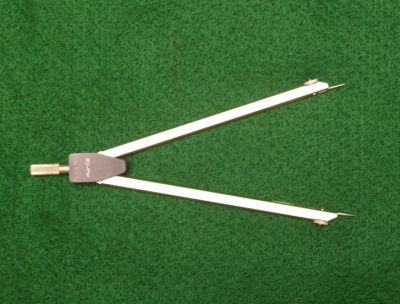 When laying out coordinated grids on paper, I used to find it rough going trying to divide odd numbers of inches evenly, or vice-versa. It's important that these lines be accurately placed if you're trying to use the grid to transfer a thumbnail sketch you made, or represent proportion correctly when working from a photo. I happen to have studied a bit of drafting, and discovered a wonderful little tool used by draftsmen, sea captains, and metalworkers alike. It's a pair of dividers, sometimes called compass-dividers, the same thing as a compass with a second hard point instead of a  pencil or pen. (You could use a regular compass for the following, but you may end up making some unwanted marks.)

Let's say I need to divide a an 10” x 12” sheet of paper into a 3  by 5 block grid. I start by adjusting the legs of the dividers to approximate 1/3 of the 10” width of the paper; (by the way, there is a “proper” handhold for adjusting/using the dividers, but I generally don't bother with it). I then “walk” them along the 10” edge of the paper, twisting them back and forth with each step in the conventional way until I reach the corner; (see picture). Chances are, I won't hit the corner exactly on the first try, but I note by how much I overshot or undershot it; (see photos). 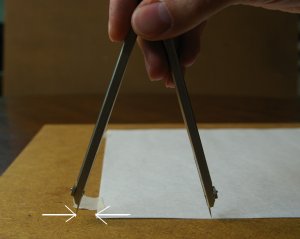 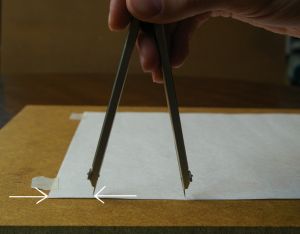 The last “step” of the dividers will tell the story. If the point has ended up hanging off the paper onto the drawing board, I note the distance between this point and the corner of the paper. I then close the dividers by approximately 1/3 of this distance and try again. If instead,  I find I've closed them too far, I open them by about 1/3 of  the shortfall. When  the last "step" of the point touches the edge of the paper exactly, I walk them along the edge again, this time making a tiny pencil mark right next to each point as it comes down. 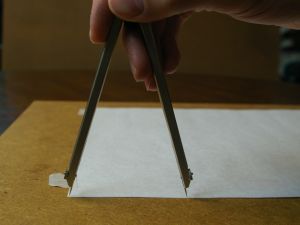 It makes sense to step off the other 10” edge at this time, while the dividers are set at the correct distance for it. After marking off the 12” edges in the same way, all that's left to be done is connect the lines with a ruler.

As with many tools, it takes a little patience to get the hang of it, but I still prefer it to trying to measure off thirds of an inch, or seeing if I can find an easier dividend for the length I'm dealing with, (which might produce sectors of less than ideal size).

There are some other possible artistic uses for this versatile tool, such as: