A New Use for Old Markers

I originally thought of this idea as an alternative precision-eraser for pastels, but I eventually found the technique more useful for acrylic painting. The idea was to remove all traces of ink from a marker, and then use it selectively to remove pigment from a support; sort of like a paintbrush in reverse. 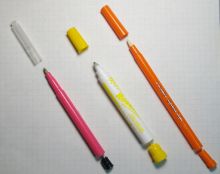 One of the first markers I did this with was of the narrow “pen” variety. Most academic markers seem to have been simply “snapped together” at the factory, so it wasn't a big problem for me to snap it apart again with a pair of pliers. I then removed the ink reservoir, a spongy little cylinder that was separate from the nib, and discarded it.

I had to get all the color out of the felt nib, so I soaked the main body of the pen in bleach water until all the colorant had “disappeared”- ( the nib turned white). I made sure to rinse it out thoroughly, to avoid any traces of bleach getting into my pictures later. 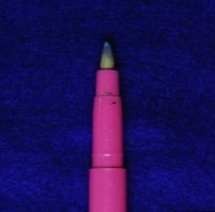 As I implied earlier, I didn't have a whole lot of success using this type of thing on pastel, but it is invaluable for refining and redefining edges in an acrylic painting. As you can see from the picture, this pen has a nib that comes to a fairly fine point. It is solid enough to hold its shape, yet absorbent enough to remove a small amount of pigment with each stroke---(naturally, we're talking about paint that's still wet here). It helps that I'm using the new Atelier Interactive acrylic, which cures rather slowly and can be reopened, but  this technique may be effective with other brands as well if you work quickly.

Let's say I've started to paint a tree, but some of the branches are looking too thick. I simply dip the pen in clean water, make a short, precise stroke along the edge of a branch, wipe the tip on a scrap  of paper, re-wet it and repeat. If any spots of dirty water remain on the canvas, they can easily be blotted up with cotton swabs, or with the marker itself, depending on how close they are to the edge you are adjusting.

The advantage an empty marker has over a paintbrush in this case, is that while the width if a brush effectively changes with the amount of pressure put on it, a felt marker tip remains a consistent shape until it wears out, which should take awhile if it's not abused. This consistent shape lends itself to precision, which can be pretty important, especially when an edge in your painting, (like on the edge of a window or a table),  isn't as straight as it should be and requires “cleaning up”.